Ladakh has been conquering the title of being one of the best trekking places in India for several decades now. And if you are planning for a summer trek between June to October looks like this 2018 is going to be another ideal year to plan it in Ladakh. I mean, if you look at the dramatic landscapes, emerald greens below the snow-capped tops, shimmering high altitude lakes and century old colourful monasteries, you’d completely agree that Ladakh will make some of the best summer adventure trip you’ll cherish for a lifetime. In fact, for trekking enthusiasts, who are constantly finding ways to mount up the peaks but fear the harsh winters of this high altitude destination…Well, this blog will give you a complete insight into some of the best summer trekking tours for 2018, because this warm and sunny season marks the opening of several gorgeous trekking trails. Explore some of the renowned tourist attractions as you escalate the Himalayan summit; adore the lovely village huts; and make good memories hiking in Ladakh surrounded by unparalleled scenic charm. For all I know, this Indian adventure destination will give you an adrenaline rush like never before. So, c’mon let’s take a peek inside what the five summer treks in Ladakh have in store for us.

Stok Kangri Trek: Dive in for an adventure of a lifetime where only the daredevils go 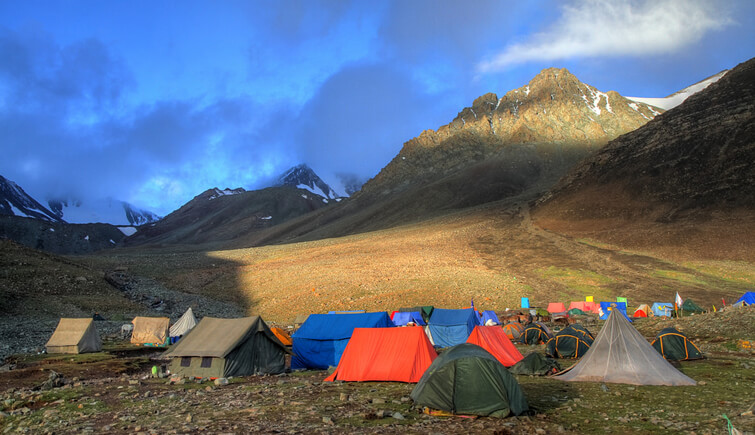 One of the fascinating places to visit for full-on adventure has to be the infamous Stok Kangri Trek. Calling it infamous, I am stating it to be a rather difficult trek that ascends to 6153 metres making it one of the highest trekkable peaks in India. Seated in the beautiful Leh region, the trek starts from Spituk that is accessible from a scenic drive from Leh. Pass the exquisiteness of natural beauty and culturally affluent city, you’ll traverse steep slopes and fight the intense weather finally tipping the top of Stok Kangri that offers a sight to sigh at the towering peak of K2. Being one of the most strenuous treks in India, the trek route to Stok Kangri has a lot of base camps to acclimate the new air and the beauty of the drastic change in environment.

As you continue your venture to the highest peak of the Himalayan Mountains, you get to also sightsee some important monasteries of Ladakh and the gorgeous Markha Valley. Stok Kangri Trek also traverses charming villages in Ladakh like the Rumbak and Stok Village. Since it is a summer trek, you can expect the weather to be clear and bright, thus, you may also get 360-degree view of the stunning landscape of Saser Kangri and the wide expanse of the two ranges of the Karakoram and the Zanskar on the south. The ultimate thing that makes the trek to Stok Kangri even beautiful is the village homestays where you can get an opportunity to imbibe the Ladakhi lifestyle during the Stok Kangri Trek in Ladakh.

The Nubra Valley Trek: Walk amid the bright and colourful places and pass through one of world’s highest motorable mountain pass 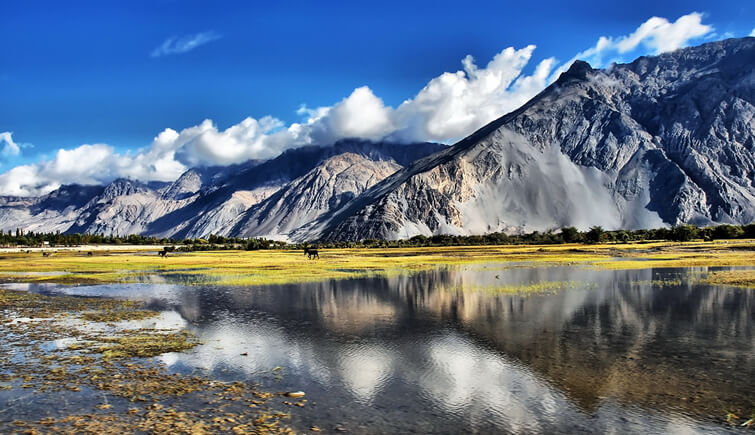 Often when thoughts of trekking in Ladakh during summer take over our mind, we stumble upon Nubra Valley. One of the fabulous trekking destinations in Ladakh, Nubra Valley will keep your adventure spirits aflame and there’s no doubt in that! And what’s best is that, this Valley is also suitable if you are trekking with family. During summers, the starting point of the Nubra Valley Trek is Leh, which radiates as a gleeful city. The entire valley blooms offering a spine-tingling sight of the Siachen Glacier from a tiny village of Panamik; the glacier happens to be the highest battlefield on earth and it also houses the natural hot springs (3182 metres). Because this valley is positioned at the northeast part of Diskit Village, between Saltoro and Karakoram Ranges, you’ll be surrounded by beautiful sights, you’re likely to stop for a moment and sigh in wonder. Diskit Gompa where Maitreya Buddha stands tall is the oldest monastery in Nubra Valley that you’ll come across during the trek.

The Nubra Valley Trek traverses the famous motorable pass which is noted to be one of the highest in the world, Khardung La (5602 metres). And it is probably one of the major attractions throughout the trek, besides, it has a long history of trading goods between India, Tibet and Central Asia. The main tourist sights you’ll get to explore while venturing on the Nubra Valley Trek are the Shey Gompa, just 12 kilometres away from the pretty town of Leh further 17 kilometres to Thiksey Gompa. The summer trek will lead you through another famous monastery in the whole of Ladakh, the Hemis Monastery. Shyok River about 550 kilometres from Leh is a sight to see, though beautiful, it is regarded as the river of death. With summer air beckoning the entire region, a trek up to a Hunder Village in Nubra valley will make you jive with joy seeing the rare Bactrian Camel (double-humped). Surrounded by the cold desert that almost looks like a stunning ocean wave is for sure to make the Nubra Valley Trek even better.

Spiti to Ladakh Trek: A way to experience an ultimate thrill that blossoms with the wild flowers during summers 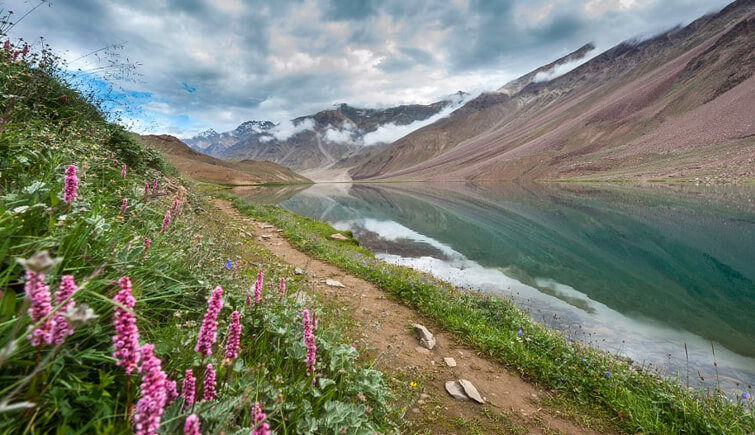 A renowned destination for trekking that offers a complete raw adventure experience is Spiti Valley to Ladakh. Often called out as the ‘The Middle Land’ for being located between Tibet and India, Spiti Valley to Ladakh trek blooms during summers. You’ll for sure embark upon major attractions like the Dhankar Monastery in Kaza and visit old villages like Chichim. Starting from the Himachal’s prime holiday place of Manali, passing the Rohtang La (3978 m) and traces of the silk route, a trading route still used by the nomads of Changthang, you’ll come across some fascinating tree-covered mountain sides that tails you to the desolate hill terrain of Ladakh. Might as well say, this trek is not for the faint-hearted as it passes through isolated regions, exposing the turquoise high altitude lakes of Tso Moriri (4522 m). Nonetheless, you can witness the ancient monasteries of Ladakh and Spiti that are architecturally rich.

This summer trek in the cold desert destinations of Spiti to Ladakh will allow you to step into the Buddhist Kingdom in India and explore some remote villages inhabited by various sects of Indo – Tibetans. By far, this moderate trek in these two similar yet unlike places of Spiti Valley and Ladakh regions are one of the favourite trekking spots among adventurers. Although the journey starts from Delhi/Manali, the actual trek starts from Kibber Village that passes the narrow Parilungbi Gorge and the Parang River. You will be smitten by the beauty of the meadows at Thaltak overlooking the deep gorge. Parang La (5490m) offers a spectacular sight of the Spiti Valley and Changthang Valley continuing to bewilder the venturers by visiting Pare Chu, Datang Yongma and more. The summer trekking trails will take you to some of the serene vicinity of Tso Moriri further offering a sight of the Mt. Lungser Kangri making the entire Spiti to Ladakh Trek a top-notch experience.

Another renowned trekking spot in Ladakh is the Darcha Lamayuru Trek, and without a doubt, it will fill your thrust to have an ultimate adventure experience in India. This is one of the best treks that will traverse many remote Ladakhi villages and grandiose looking monasteries on the way. Although the trek route starts from the Manali, the actual walk will begin from Darcha, a tiny village seated in a region of Lahaul and Spiti district, leading to Palamo (3825 metres) taking approximately five hours. Besides, a visit to Rohtang La (3,978 metres) is evident from Manali, it is perhaps an unavoidable experience to cherish. From the mountain pass, the trek will guide you to several remote villages and the famous confluence of Chandra and Bhaga in Chenab. The Darcha Lamayuru Trek also passes along the Tsarap River and Lakong river after crossing the 5100 meters Shingo La into the heart of the Zanskar Valley.

Passes through a wide dirt landscape, high altitude quaint villages and mountain passes, this popular Darcha Lamayuru Trek, leads to several narrow tracks to some ancient monasteries like the Phuktal Gompa. This is followed by Padum leading towards Mune where you can explore the Mune Monastery and Bardan Monastery. If you’re lucky, the route to Darcha Lamayuru seldom encounters mountain wild animals like the musk deer or the blue sheep. Further, the trek embarks upon passes like Shingo La (5,090 meters) and Parfi La (3,950 meters). This trekking expedition also requires you to cross some cold rivers like Bhaga, Chandra, Tsarap, Zanskar, Doda and Indus. Witnessing monasteries and gompas and deep gorges, the Darcha Lamayuru Trek also offers religious attractions that you may make it as a short layover at the Gompa of Mani, Bardan, Karsha, Lingshed. Finally Lamayuru where you can take in the beauty of the moonlike landscape ultimately making Darcha Lamayuru Trek one of the best summer trek in Ladakh Himalayas. 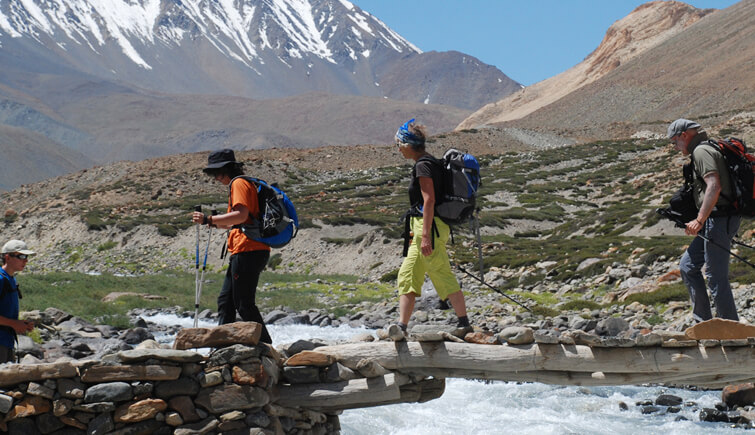 Junglam Trek is one of the best treks for summer in Ladakh and it is considered to be one of the most challenging treks in Ladakh. Junglam Trek requires one to cross Zanskar and the Stok range by traversing ten high altitude mountain passes. Along the rugged trails of Ladakh, the expedition starts from the Leh and the actual trek from Hemis. What makes Junglam Trek so tedious is perhaps it requires the mountaineers to pass through Tilat Sumdo which has a confluence, a small stream meeting Zanskar river. Thus, Junglam Trek is most preferred to venture during summers when the water level is at the lowest making it easier to access to the other point. Tilat Sumdo is also an ideal base camp for treks to Chadar and from here you can see splendid views of the Himalayan Range. The trek will also lead you towards Langthang Chu, further ascending towards Zarlung Karpo La (5050 metres).

The route that leads you across the beautiful and dramatic landscape will guide you through many mountain passes like Kongmaru La, Zalung Karpo La, Chhar Chhar La all offering a spine-tingling sight of the deep and narrow gorges, valleys and great views of the Zanskar River from Zangla Sumdo. Throughout the trek, you’ll cross some of the top tourist destinations that treasure interesting attractions like ancient monasteries, gompas and charming villages. Thiksey Gompa being a renowned sightseeing place, it was known as the summer palace for the kings of Ladakh, you’ll also come across a 12 metre statue of Shakyamuni Buddha inside Dresthang Gompa. An added, so to say a surprising attraction during Junglam Trek would be meeting some wild species lurking amid the cold mountains of Ladakh. The strenuous Junglam Trek truly baffles the first time trekkers and it can be more attractive to trek in the months of September and October.